Day 10 Nutritional Tip: There are natural foods and herbs that thin the blood effectively and safely 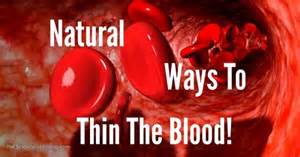 Recently, I answered a question for a girlfriend of mine inquiring about a good plan of action in regards to natural well care for her mother who is taking a blood thinner, called Coumdin. My first question was what is her reason for taking this drug ?Her reply was Hepititus C.

So, here are good strategic plan of action consisting of FIVE important things to consider when your doctor puts you on blood thinners:

1) Find out from the doctor specifically why the blood thinners were prescribed. Sounds like a crazy thing to ask, but many times the side effects of these anticoagulants are worse than the risk of any blood clotting. So, for instance, if it’s being prescribed as purely a precautionary measure, there are far more effective, and safer, actions to take! Blood thinners are given to people at risk of stroke, high blood pressure and such; when dietary changes can safely and effectively correct those very conditions.

Bottom line, a patient should NOT be afraid to ask the doctor at least 10 related questions–or do the research themselves–before they allow themselves to take that, or any, prescription! One of the main questions to ask (after the obvious question of “WHY am I taking this?”) is if the doctor has a plan of action for the patient coming off the medication? Or does the doctor expect the patient to just take this forever?

2) Learn how blood thinner medications work.  Most people think they actualy thin the blood (which seems logical), but they don’t.

Here are the workings  of the blood thinner, Coumadin:
http://www.drugs.com/coumadin.html

Here are the workings  of the blood thinner, Xarelto:
https://www.xarelto-us.com/blood-thinner/how-do-blood-thinners-work?utm_source=bing&utm_medium=cpc&utm_campaign=Anticoagulants&utm_term=what%20causes%20blood%20clots&utm_content=Blood+Clot+-+General|mkwid|xKnTlfrQ_dc|pcrid|7690239425

3) Learn what causes blot clots in the first place. Usually, it can be traced back to dietary issues, obesity and a sedentary life–all which can be corrected within 7 to 30 days WITHOUT medication!
http://www.mayoclinic.org/symptoms/blood-clots/basics/causes/SYM-20050850

Rare side effects of Coumadin:

5) Consuming whole, plant-based foods can do the same for the body as blood thinner drugs.  Eating in a healthy manner is the best prescription for your body to allow it to heal from or prevent all the diseases that are dietary related: diabetes, obesity, high blood pressure, cancers of various types, fibroids, auto-immune issues, and the list goes on and on. However, mixing plant-based foods with some drugs such as blood thinners, may cause a negative reaction within the body.

Typically, your doctor won’t tell you the reaction is due to the fact that when eating the green leafy vegetables and other plant-based foods, the body is getting everything it needs from that food to repair itself. So combining that food with the medicine means you’re taking double doses of medicine every day, and yes, that would be a problem. So, what does the doctor tell the patient faced with this dilemma? Stop eating the vegetables that are interfering with the medicine. I know for a fact, they do this. My beloved friend, Juana’s, doctor told her to stop eating her vegetables and stop drinking her green juice while she was going through chemo therapy. My beloved friend was then dead within three months.

​
So, there you have it. Just a few things to consider when your doctor says you must go on blood thinners. It doesn’t have to be that way! It SHOULDN’T be that way! Juana would still be alive today if she was confident enough to believe she knew what was good for her body more than the doctor knew. I’m not blaming her, because  it’s very common for people to make that mistake. I’m here, though,  to encourage you to STOP making that mistake.

I just spent about an hour of my time researching and writing this blog. No doctor is going to do that for you–there’s simply not enough hours in the day for them to do that. So, guess what? YOU must research and read. YOU must learn. Empower yourself with the knowledge to stay alive!

Food IS God’s medicine; and this medicine has NO SIDE EFFECTS!

Can you name the herbs in the image above? If so, then congratulations! You can now self-medicate if ever your doctor says you need blood thinners. Better yet, start consuming these herbs and the foods mentioned above on a regular basis and you will never have to hear the doctor tell you that!

Juice Plus+ (JP) is a product I would take in place of blood thinners. JP is whole, plant-based food in capsule, gumnmies and powered shake form. Even when consumed while you’re continuing with your regular way of eating, JP will begin to make a huge improvement in your quality of life. For more information, contact me or click the image.